Chlorophyll is an important pigment in the plant that absorbs energy from the light used in photosynthesis. Healthy plants generally have higher chlorophyll content, and the amount tends to decline during leaf senescence or when plants are under stress. Therefore, it is often used to detect and study plant health and growth like stress, nutritional state, etc. Furthermore, chlorophyll can also be used as an indirect indicator of nitrogen, an important parameter commonly used in agricultural management to achieve optimum yields.

The traditional way of measuring chlorophyll content is through the wet-chemical method in a lab setting. It involves harvesting the leaves from the plant and extracting the chlorophyll using organic solvents. After which, a high-performance liquid chromatography is used to determine the chlorophyll content. This method is costly, time-consuming, and involved tedious extraction procedures which destroy the leaves and deny the monitoring of the plant over time. In contrast, hyperspectral imaging (HSI) technology offers non-destructive, fast, and objective chlorophyll measurement.

HSI is a combination of both spectral measurement and digital imaging. With HSI, the physical structure of plants, such as leaves and stems, can be acquired from its digital imaging capability and the physiological or biochemistry information from the spectral measurement based on the continuous examination of a large number of narrow and contiguous spectral bands. HSI cameras come in many different types, such as line scan (push broom), point scan (whisk broom), snapshot, etc. In many vegetation and agriculture research and applications, line scan cameras are preferred due to their speed and high-quality data.

HSI is used increasingly in many research and applications, especially in vegetation and agriculture. For instance, Yu et al. (2016) uses a visible and near-infrared (VNIR) HSI camera to estimate the chlorophyll and SPAD distribution in pepper leaves during leaf senescence. Zhao et al. (2016) uses HSI, coupled with chemometrics, to measure chlorophyll and carotenoid contents and to generate distribution maps of pigments in cucumber leaves with the angular leaf spot (ALS) infection.

Light absorption by chlorophyll occurs in the visible region, between 400 and 700 nm, of the electromagnetic spectrum, especially in the red (600–700 nm) and blue (400–500 nm) wavelength. Chlorophyll absorbs light very efficiently until a certain point between the visible and near-infrared regions (680-730 nm), and this is known as red-edge. Typically, information from the blue region wavelength is not used to estimate chlorophyll as it overlaps with the light absorbance of the carotene pigment. A sharp increase in reflectance in the red wavelength can indicate a decrease in chlorophyll content.

HSI measurement of chlorophyll in the laboratory is typically conducted inside a dark chamber (cabin) to achieve constant illumination and measurement conditions. An HSI camera is positioned, in nadir orientation, above the potted plant. A white panel or tile is usually used as a reflectance reference. Either a motorized line scanner for the HSI camera or conveyer for the potted plant is used to generate movement and image a full sample. An illumination system (typically halogen lamps) is positioned at an angle of 45° to illuminate the camera’s field of view. 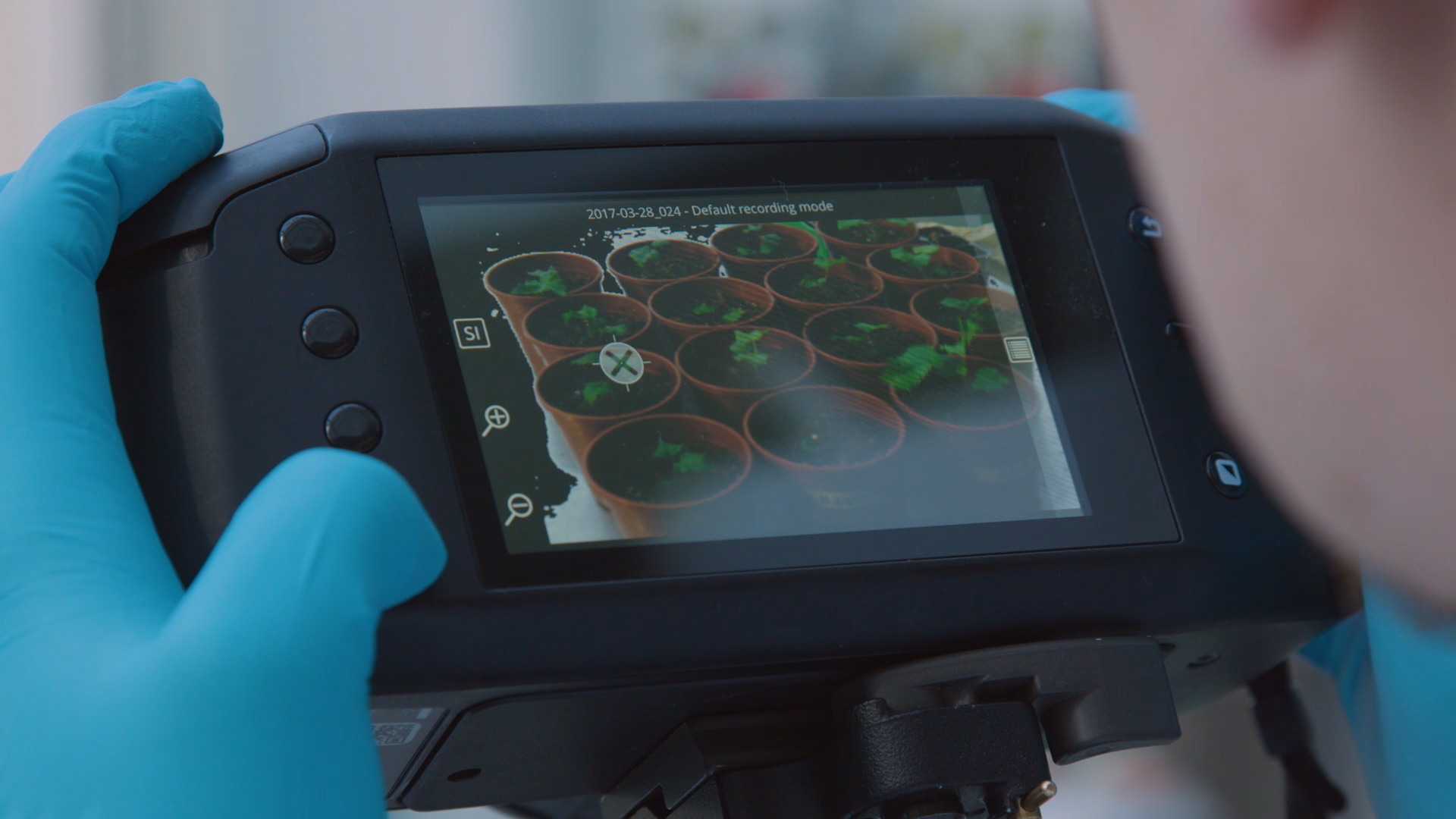 Specim IQ is a portable, line scan HSI camera with touch screen and simple graphical user interface. It operates similarly to a digital camera and requires only minimal user input. It comes with an internal scanner capability that does not require the camera or the imaged object to be moving during measurement. Specim IQ can capture hyperspectral data from the VNIR range (400-1000nm) and convert them into instant classification results on the screen.  It also comes with an onboard processing capability that allows users can develop and download their applications through its Specim IQ Studio software.

The novel Specim IQ is utilized in various agriculture and vegetation research like the quantification of powdery mildew infection on barley and the study of Arabidopsis Thaliana mutants in stressed and non-stressed conditions.

Hyperspectral is made easy with Specim IQ. Check out this video to find out more.

Need help developing and implementing HSI in your research? Contact us for a free consultation with our HSI specialists and let us assist you in finding the right HSI solutions for your needs.